Electricity access and distribution vary widely within the Metropolitan Region context regarding residents, socioeconomic levels, housing, and climate aspects that ultimately affect the quality and continuity of electricity services.

The Metropolitan Region has a surface area of 15,403 km2 and a projected population of 8,310,984 inhabitants in 2022, distributed across 52 municipalities based on the 2017 Census. It is the most densely populated region in the country, with an average of 539.6 inhabitants/km2. 96.3% of its residents live in urban settlements, while 3.7% reside in rural areas.

Concerning household poverty, the 2020 Casen Pandemic Survey[1] indicated that 209,221 households live below the income poverty line[2], representing 9% of the region's total population. These figures show a significant increase in indirect poverty over the last measurement in 2017. Meanwhile, multidimensional poverty[3] represented 340,496 households in 2017[4], or 20%.

Meanwhile, the statistics show that inequality in the distribution of income worsened alongside the poverty level. The Gini[5] index observed in 2020 was 0.52, considering households' income in the Metropolitan Region, presenting a significant income gap. Homes in the highest decile showed gains 35.2 times higher than households in the first decile. At the national level, the region has the worst performance in terms of distribution of wealth, according to analysis based on the 2020 Casen statistics.

Finally, the climate conditions in the Metropolitan Region are essential to consider for the quality and continuity of the electricity service. We know that extreme temperatures and water scarcity increases are territorial risk factors.

In 2021, Chile's Meteorological Department statistics indicated that the region had a 67% deficit in precipitation and was one of the four driest years recorded since 1914. This situation challenges the energy sector to design and implement concrete actions that favor the mitigation of the effects of the climate crisis today.

[1] Given the methodological adaptation made to the Casen Pandemic Survey, we must compare these results carefully with poverty rates from previous years.

[2] Income poverty reflects households that do not make enough income to consume a basic set of food and non-food items.

[3] This index reflects the existence of multiple areas of lack, including education, healthcare, employment, housing, and social cohesion.

[4] In 2020, the multidimensional poverty measurement did not occur due to the methodological adjustment to the Casen Pandemic Survey.

[5] This is an economic measurement used to calculate income inequality among the territory's citizens, usually a country.

Enel Distribución Chile operates in 33 municipalities of the Metropolitan Region, supplying over 2 million customers and covering an area of 2,105.4 km2 representing 44% of all electricity distribution sales across the country. 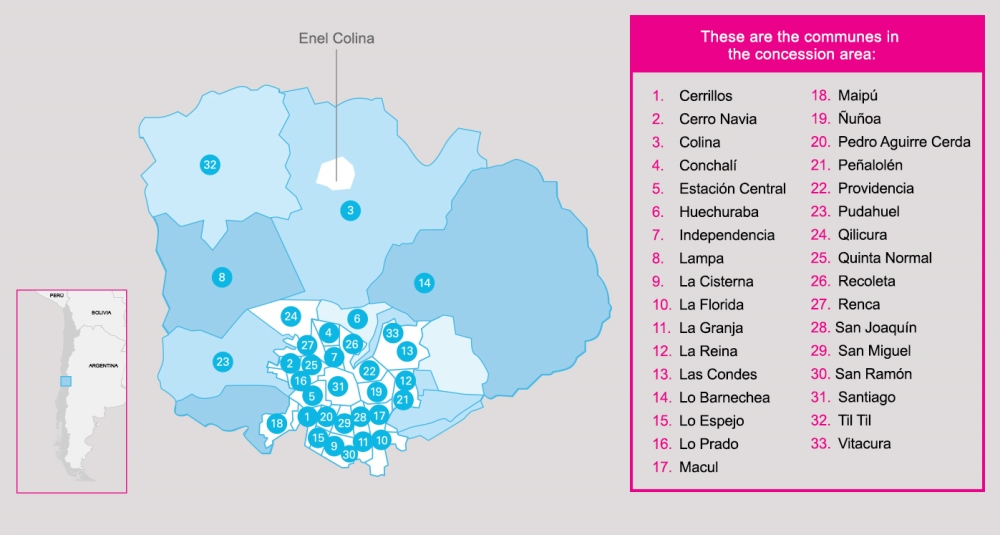 The Sustainability Plan developed by Enel Distribución Chile is aligned with the company's global strategy, which is committed to contributing to the Sustainable Development Goals. In this sense, as of 2021, we have collaborated with over 211 communities and 33 municipalities towards a fair energy transition. Changes will not only come in how we generate, distribute, and use energy but also in changing roles of the Enel Group companies in creating shared value to develop initiatives that generate value for the company, the community, and interest groups.

Considering identifying priority issues for the community, including the mitigation of operational impact, long-term collaboration, and the reduction of greenhouse gas emissions, Enel Distribución Chile proposed a 2021-2023 Territorial Sustainability Plan aligned with the company's strategic priorities. The plan includes projects aimed at: (i) reducing the energy poverty gaps, improving quality, and promoting the safe and efficient use of energy; (ii) promoting access to high-quality education for our communities, providing knowledge, and raising awareness of climate change; and (iii) supporting the economic recovery and employability, understanding the new scenario imposed by the Pandemic.

Rights and Obligations of Electrical Product and Service Consumers

An experience in collaboration with the Planetarium

School of Electrical Safety for Institutions

Contributing to the development of more sustainable, resilient, and energy-safe communities

Visits to the Chilean Museum of Pre-Colombian Art

Let’s Talk about Safe Energy Use

Renovation and Delivery of Lighting Systems for Multipurpose Sports Fields