Reinventing oneself during a pandemic

The day that Bernardita Amolef shut the gates of park, she called her workers to her office. She tried to calm them in these times of uncertainty.

“Today, the pandemic is something that affects all of us. One day it will come to an end. But for now, we must take care of ourselves and I have to send you all home. Tomorrow, I will call you and see what we can do to continue, ”she said.

This was a speech that the president of the Mapu Pilmaiquén community had never wanted to have to make to her 17 employees, who stood there astonished. Since its inauguration in 2017, the Parque La Isla – Salto La Olla has never shut its gates.

“On the 5th of March when the authorities said we would enter quarantine, it hit us like a bucket of cold water. People were crying in the office.” Located just 45 minutes from Osorno in a small rural town called Pilmaiquén, the arrival of Covid-19 changed the lives of this Mapuche community and the whole world.

The pandemic, a business opportunity

The same month, Amolef proposed an idea through the community WhatsApp group of making protective masks for local residents. She knew there was a lack of stock and thought that it would be a good way to contribute something to the area while generating some income at the same time.

They started the project with just four women. Bernardita searched online to download the health ministry specifications for making protective masks and began to quote prices for buying materials. She did all of this during the toughest period of the pandemic.

The first order she received was for 2,000 masks. "We won't be able to fulfill the order," she thought. But they did it. Next came an order for 4,000 masks and they were able to deliver them in fewer days than promised. 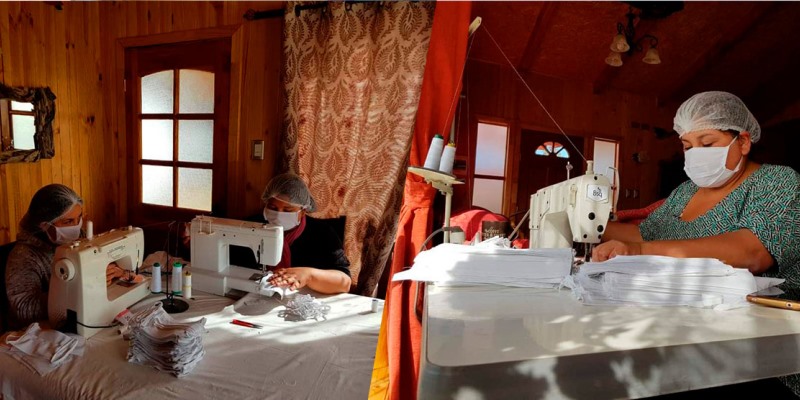 “The pandemic became a source of employment. We had never had 25 women working for us, and not only from the local community. That was a wonderful and beautiful experience. Here, unemployment levels are very high amongst women, there are no jobs.”

“The pandemic became a source of employment. We had never had 25 women working for us, and not only from the local community. That was a wonderful and beautiful experience. Here, unemployment levels are very high amongst women, there are no jobs,” said Bernadita.

They sold more than 30,000 protective masks to seven companies during the months of highest demand.

Enel Chile was one of those companies and bought some 7,000 masks, which it donated to local communities that needed sanitary supplies.

“Tourism was the sector that was most affected by the pandemic. But this brought different communities together at a critical time, because their only source of income had been cut off. Enel supported communities around the country during the first, most serious, wave of the pandemic. Enel helped local tourist operators become producers of protective masks, then purchased those masks and donated them to needy communities. In this way, we contributed to economic stability while at the same time helped with sanitary preventive measures,” said Antonella Pellegrini, Enel Chile's sustainability and community relations manager.

The experience of reinvention

In December 2017, Enel Green Power loaned out land to the Mapu Pilmaiquén community. Mapu Pilmaiquén would be in charge of managing almost seven hectares of pristine forests, waterfalls and native flora and fauna. In addition, Enel provided training for 45 people as tourist guides.

What started out as conversations in 2012 between the community and Enel became one of the only sustainable ethnourism projects in Chile. This was also the first time that a private company had returned land to an indigenous community. 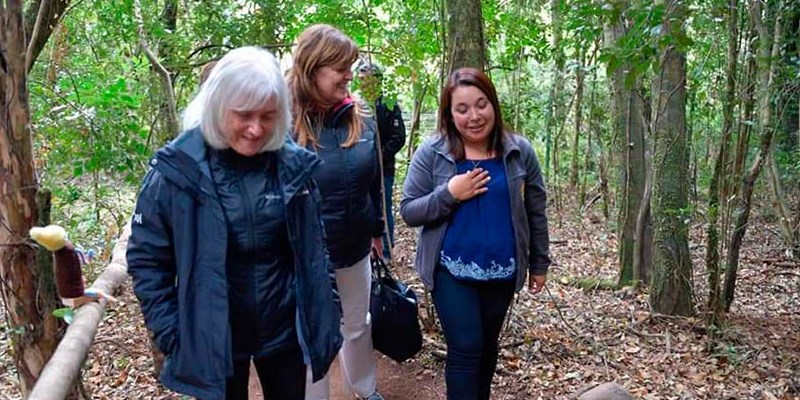 “We have formed a good relationship. I think we were able to achieve that due to the company's ability to comprehend and take a philanthropic view of sustainability and its relationship with the land. And it was able to move beyond that to take an integral view of the land,” said Antonella.

“We have given many talks to share our experience with other communities to tell them that it is possible. It is possible to set up a project with a company, that is complementary to both, and to create good relationships with the local communities,” said Bernardita, who as community president, was invited to the UN Forum on Business and Human Rights, held in Geneva in November 2018. 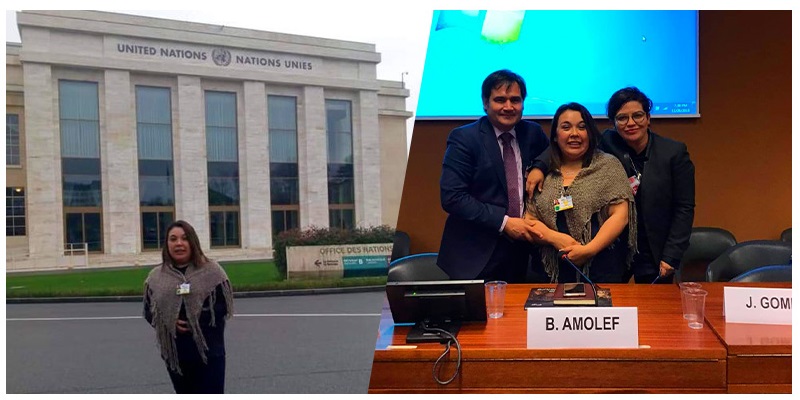 Bernardita Amolef at the UN

Pellegrini believes that the park is “a unique and symbolic project that meets the UN's Guiding Principles on Business and Human Rights.” It is a recognition of indigenous people's right to cultural identity. In addition, it is a good way to provide tools for autonomous growth to the community.

After visitors on the guided tours showed particular interest in the native craftsmanship on display, Bernardita and the other women collaborated with Enel to receive training in how to make Green Seal artisan crafts that are environmentally friendly. Enel provided the machinery while the women contributed the creativity and, together, they started making their own, original crafts.

Such collaborative work has been tried and tested in other parts of Chile. For example, in mid-2020, the We Kimun agricultural cooperative supplied 15,000 kilos of potatoes to the Lonquimay municipality, in the Biobío region, which were distributed to families that had been worst affected by the pandemic. We Kimun started in 2017 as a small community initiative. After collaborating with the public and private sectors, including Enel Generación, today it is a successful enterprise that employs members of the local indigenous community. We Kimun has official approval from the state agriculture and livestock service (SAG) and, in April 2021, inaugurated a new temperature-controlled storage space for the potatoes and a workshop for developing added value products.

In September 2020, Enel launched the Artisanal Fisheries Development Fund for the fishing town of Colonel. The fund is directed at the families of 20 fishermen's unions that signed a cooperation agreement with Enel Generación. The company received applications for more than 800 projects, of which 583 were selected. One of those projects was that of Paula Fuentealba, who is the owner of the seafood products company Caleta Lo Rojas. In spite of the difficulties faced by the pandemic, her business continues to grow. Thanks to the funding she received she has been able to purchase new refrigeration machinery to meet growing demand.

“It has been a great help for us. I now have my father and my brothers working with us. We are also employing four other people because people need to work at the moment and we try to help whatever way we can,” Paula said.

In 2021, Enel Chile and its subsidiaries will hold seven more funding competitions based on the Shared Value Creation model. The funding will be open to applications from the north, center and south of the country. The funding is intended to help boost economic activity and entrepreneurship in the municipalities of Ollagüe, Toconce, Estación San Pedro, Copiapó, Quintero, San Clemente, Colbún, Alto Biobío and Coronel.

“We believe that providing tools for economic development to communities helps reduce their economic dependency on private companies. This is a core element of the shared value creation model concept, which is not the same thing as philanthropy. It does not consider investment in social ventures as a company cost, but rather a long-term investment for community growth.” 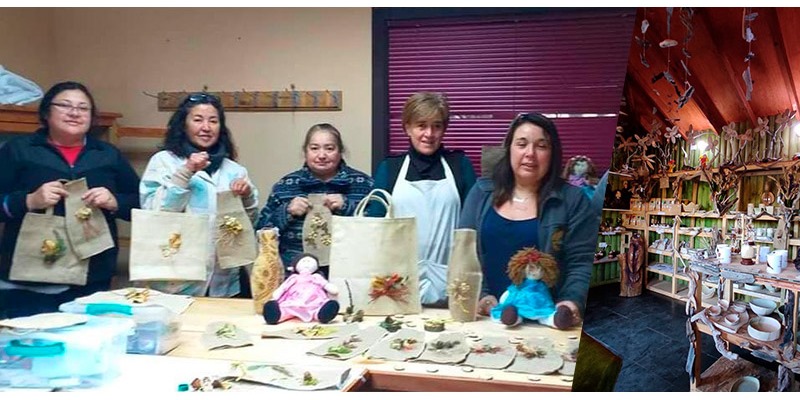 Since March 2020, and after several months of intermittent quarantines, the La Isla park reopened to the public on October 20, 2020.

With a maximum daily limit of 70 people, due to sanitary restrictions, the park’s first visitors were able to once again reconnect with nature. After long periods of lockdown, isolation begins to have negative effects on people.

After speaking with the visitors, Bernardita realized that the people were in great need of relaxation and connecting with nature.

So, using her knowledge of natural medicines, and again thinking about how to help out during these stressful times caused by the pandemic, the women of the community started offering "relaxation baths." They did this by placing bags of herbs that they grow in their own gardens, in the bath tubs.

“The local economy is fundamental in all contingency measures and that is why it is important to foster it. It is the backbone of any sustainable economy. I believe that the pandemic has shown this and that we have learned from it,” said Pellegrini.

Pellegrini also believes that “this was a case of immediate reinvention brought about by the determination of the people. You have to have the capacity, the courage and the drive to keep going. They reinvented themselves and that was very positive.” 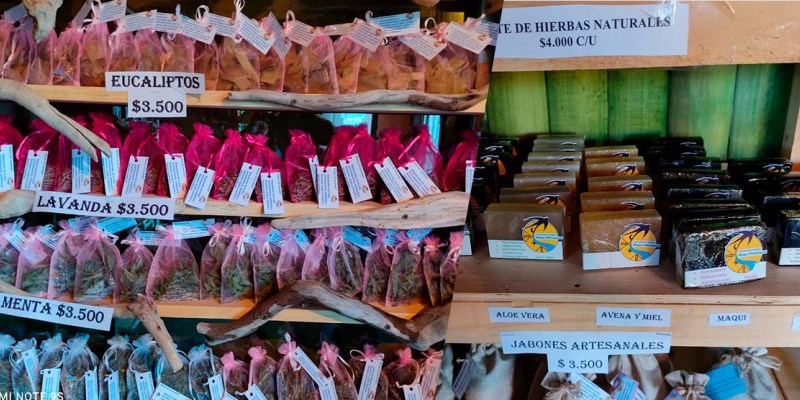 Medicinal herbs and soap made by the community

Through mid-April of this year, La Isla has remained closed. However, women and men from the community continue to produce masks, but on a smaller scale. They are now more focused on promoting their “relaxation baths.”

From her home in the park, Bernardita says, “we cannot get frustrated. While we have the opportunity to reinvent ourselves, we may occasionally trip up, but we will always get back up again. Tomorrow will always be better.” Nature is circular… And our economy?