Enel Chile's circular economy area plays an active role in collaborating and participating in national initiatives and events, which establish medium and long-term objectives and commitments for the promotion of a sustainable way of doing business, managing the challenges of climate change and those of the electric power sector with a vision of the circular economy.

Since 2020, the Circular Economy area, along with other Enel Chile business lines, has participated in diagnosis by sector towards the creation of the Clean Production Agreement: Transition towards a Circular Economy for Business Action, a process seeking to guide the creation of strategies and actions in order for companies to incorporate the circular economy in their value creation processes. At the same time, during 2020 Enel, through our country manager Paolo Pallotti, joined the Advisory Council for the circular economy of the Scale 360 ​​by the World Economic Forum along with a group of representatives from the public, private and civil society sectors and thus, leading a collaborative effort in order to accelerate the transition towards the circular economy in the country.

During 2020, Enel Chile's circular economy area actively participated developing the Circular Economy Roadmap for Chile, the objective of which was to promote actions fostering the circular economy at a cross level, with a systemic strategy helping to organize efforts and to generate synergies to move forward with the necessary strength.

In turn, the same year Enel Chile joined the ISO / TC323 round table, which since 2019 is part of the worldwide level definition of international standards for the Circular Economy.

On the other hand, in 2021, Enel Chile's circular economy area will co-organize the International Seminar along with eleven institutions: "Digital Transformation for Cities, Iquique 2021", which will focus on strategies and technologies for circular cities.

In recent years, the circular economy has gained significant momentum in Chile, particularly due to its triple benefit of creating new businesses, generating employment and combating the climate crisis.

Towards the future and with the discussion of the 2040 Circular Economy Roadmap, the REP 20.920 law, the Chilean Plastics Pact (CPP) and the new draft Law with the explicit goal for Chile to achieve carbon neutrality by 2050, a new economy is expected to emerge, rethinking the way we produce throughout the value chain, consuming consciously and inhabiting cities as a community.

Chile’s Circular Economy Roadmap seeks to drive actions fostering the circular economy at a cross level during the next 20 years, with a systemic strategy helping to organize efforts and to generate synergies. In order to achieve this, the consensus and articulation of various national players from the public and private sectors, civil society and the academy are key.

7 medium and long-term goals were defined, among which are the generation of 180,000 new jobs, to increase the general recycling rate by 75%, to increase material productivity by 60%, the elimination of 90% of micro-garbage dumps, among others.

The construction process for the proposal began in 2019, including initial studies and information surveys seeking to determine the current status of the circular economy in the country. From these studies, 9 gaps were chosen for developing the circular economy, out of which the lack of trained human capital, the lack of regulations in line with innovation stand out, among others. During 2020, a series of workshops were held and the round tables were set up, in which various players from the country participated, sharing their experience in order to delve into the issues having become priorities. Enel becomes part of this conversation by participating in the work table of the “Market Development” EC Roadmap. During 2021, the first proposal of the roadmap was published, which was submitted for public consultation in order to collect observations from the population. These observations are currently under review and the final version is being prepared.

Regulations play an important role in accelerating the transition to the circular economy, providing a clear framework for action in order for the different players to participate. This is why since 2019, ISO / TC323, international standardization norms for the Circular Economy began to be discussed worldwide.

This new ISO will enable the development of requirements, guidelines and support tools in the field of circular economy projects. An ISO committee was approved for its development, which includes 79 participating countries. The objective of this committee will be to develop requirements, guidelines and supporting tools in the field of circular economy projects. Enel participates as an expert in the drafting of these new regulations: ISO/NP 59004 CE - Framework and principles for implementation, ISO/NP 59010 CE – Guidelines on business and value chains, ISO/NP 59020 CE – Measuring Circularity framework and ISO TR 59031 – Performance bases approach for circular economy.

Beginning the committee's work, the agreement was to form working groups, which are to work on giving priority to terminology standards, principles, implementation guides, measuring indicators, case studies, among other subjects, as a future circular system management standard.

During 2021, work will continue on the development of ISO / TC323 with the participation of Enel as an expert. 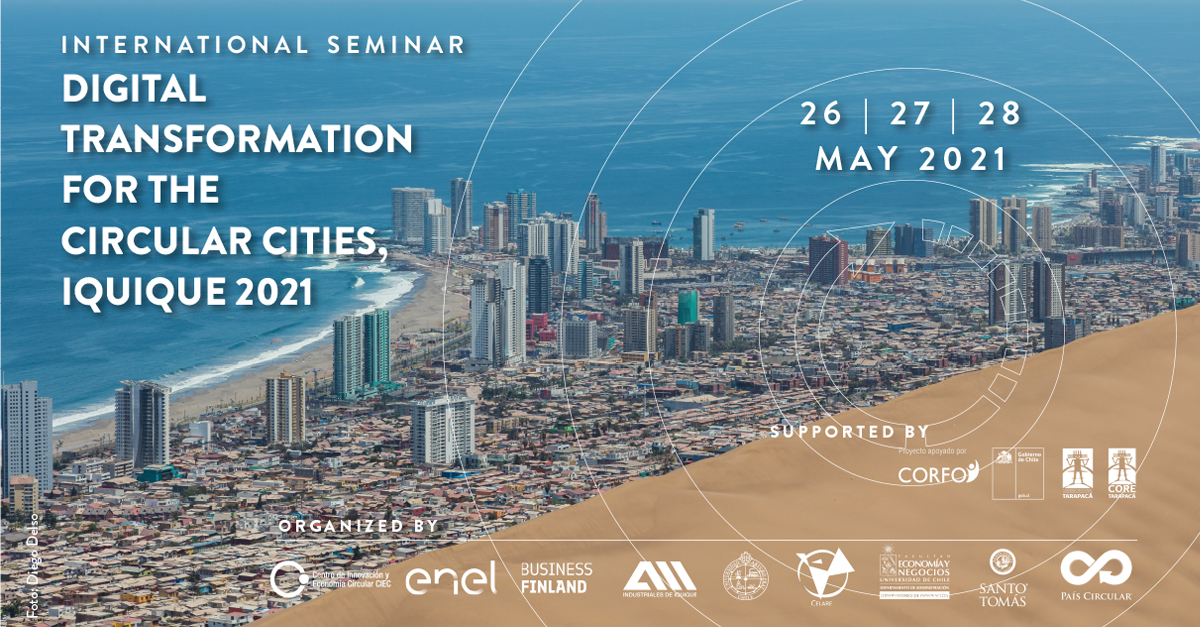 3.- Digital Transformation for the Circular Cities

The International Seminar: “Digital Transformation for cities, Iquique 2021” is an open seminar that will be held on May 26, 27 and 28, focused on circular cities, led by eleven institutions, among which Enel is included. During these three days of talks and discussions, relevant speakers will be lecturing, one of them being Luca Meini, Enel's Global Head for Circular Economy.

This seminar seeks fostering the transformation of the city of Iquique and the Tarapacá Region as a benchmark of circular city, under a digital transformation model impacting the development of industry, entrepreneurship and innovation, in order to generate economic, social and environmental value for its inhabitants.

In addition to the content that is to be exhibited during the seminar, videos and documents from national and international experts related to Circular Economy are to be made available to the community, using a simple and applied language. You may visit the website here.