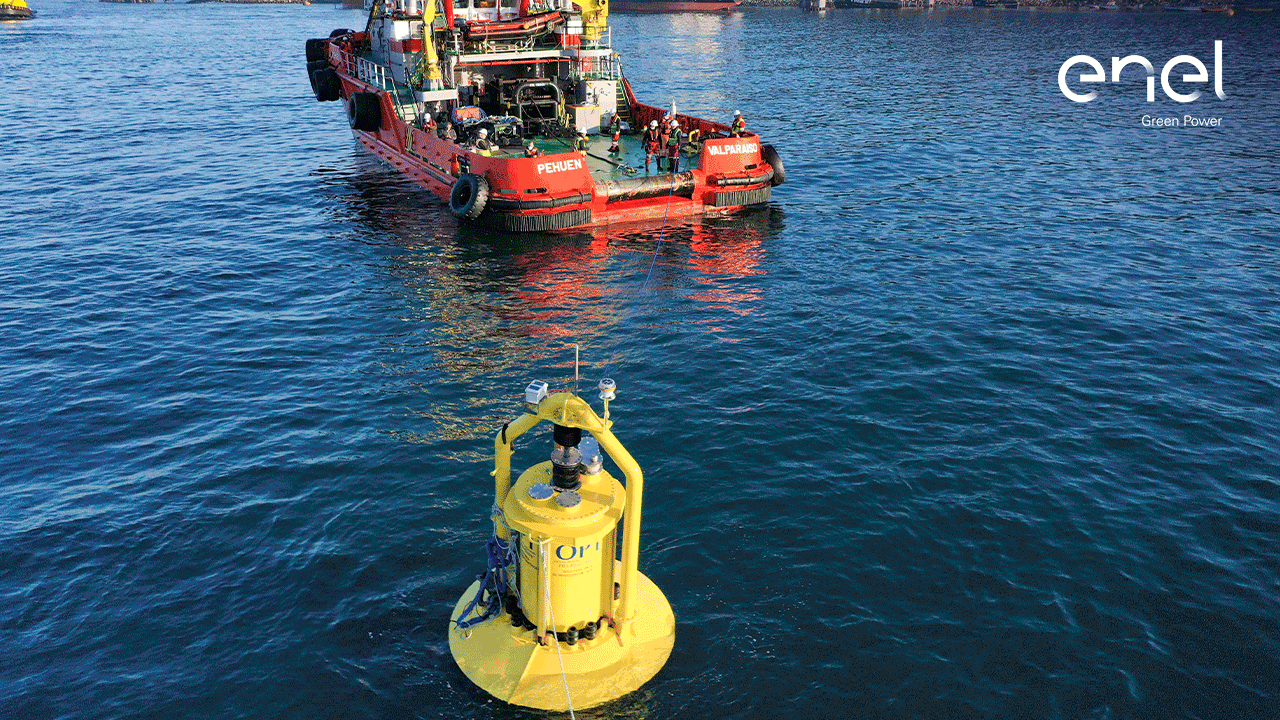 Santiago, April 22nd, 2021 – Enel Green Power Chile, Enel Chile's renewable energy subsidiary, installed the PB3 PowerBuoy, the first full-scale wave energy converter off the coast of Las Cruces, in the Valparaíso Region. The marine energy generator installed by Enel Green Power is the first of its kind installed in Latin America and the fifth in the world.

The innovative system is able to convert wave energy into electrical energy that is stored in a 50 kWh battery system located inside the PB3 PowerBuoy, which feeds the different oceanographic sensors that monitor the marine environment. It is not electrically grounded. The information obtained from this device will allow us to learn about the behavior of the waves, optimize the resource, and thus lead the investigation of this type of renewable energy in the country and in the world.

“We want to explore all the alternatives to accelerate the energy transition and achieve carbon neutrality as soon as possible. This is why we were the first to promote the development of wind and solar energy in Chile, in the same way that last year we announced our participation in the first pilot project to produce green hydrogen in Chile. Today we want to promote the generation of electricity from renewable energy from the movement of the ocean and sea”, said Paolo Pallotti, general manager of Enel Chile.

“This type of energy production has several advantages: it is available 24 hours a day, 365 days a year, it is silent, and it is not located in populated areas. This country has excellent conditions in terms of marine resources to produce wave energy. The installation of this device represents great progress on the path towards the development of renewable energies in Chile”, explained James Lee Stancampiano chairman of the board of MERIC.

This  innovative system represents a first milestone for the potential development and growth of marine energy in Chile, as part of an innovation project called Open Sea Lab carried out by MERIC, the first center of excellence for marine energy in Latin America, an institution co-founded by Enel Green Power Chile and Naval Energies, a European company specialized in marine energy technologies.

“Chile is among the first countries in the world for its marine energy potential, but that potential needs to be studied and better dimensioned. The Open Sea Lab project, which the MERIC Center and its partners will promote during the next three years, will constitute a technological scientific achievement for our country, by opening great opportunities to lead the research and development of sustainable marine energy, at a national and international level”, said Gloria Maldonado, Executive Director of Energía Marina SpA & MERIC

The PB3 PowerBuoy is provided by Ocean Power Technologies, a US renewable energy company. The system, installed 1.2 kilometers from the coast of the Coastal Marine Research Station, is 14 meters long and weighs 10 tons, designed to operate in the ocean as of 20 meters in depth. In this case, it is anchored, floating at a depth of 35 meters.

The validation of results coming from experimental operation, in real and challenging oceanic conditions on the Chilean coast, will also make it possible to understand more about the potential and future development of Ocean Energy from technical, social and environmental point of view.